Alfie is a chocolate & tan dog sired by Breezybrook Wonky and is out of FTAW Bella Minnie of Breezybrook he is a proven stud, and is a nice stamp of a cocker with a beautiful coat.

He is not as bold as our other dogs and requires a playful bitch in order to get a good mating, this will hopefully improve with experience. 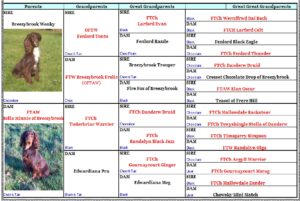 Rupert is a golden dog sired by FTCh Kiltonbeck Cooper and out of Prariewood Marina. He is used beating and picking up. He is incredibly fast and extremely stylish and has a nice nature. Rupert is a proven stud dog throwing solid colours as well as parti-colour and roans.

Rupert has been health tested Clear as follows: 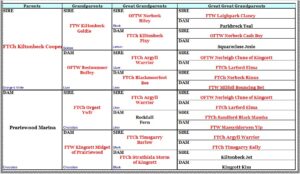 Hotshot is a chocolate & tan dog sired by OFTAW Chyknell Jackdaw of Breezybrook and is out of OFTAW Breezybrook Trouper’s Dream. A dog with tons of drive and style, stunning looks and a superb pedigree. Hotshot is only available to a limited number of approved bitches. 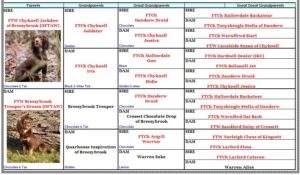 Quest is a Black and Tan dog sired by FTCh Bishwell Barcud and out of FTAW Bella Minnie of Breezybrook.  He fast and stylish. A very quick learner who is bold with a superb temperament. He is DNA colour tested and carries black, chocolate, gold and Tan point. A Proven stud. 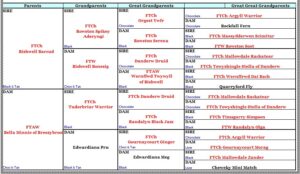 Sandy is a chocolate & tan dog sired by FTCh Chyknell Gold Star and is out of FTCh Chyknell Iris. He is a fast and stylish hard hunting dog that loves bramble! A very consistent dog that excels taking the line of a runner. He sires puppies of all colours. He is a proven stud dog. Now retired from trialling, he is happy running the beating line with Jim or picking up and he is also a marvellous peg dog and does not run in!

Sandy has been DNA health tested clear as follows: 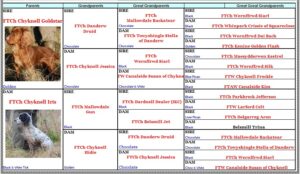 Top Notch is a red dog sired by our own Kenmillix Magical Fudge of Breezybrook and out of Breezybrook Tumble. He is a strong & powerful hunting dog with a very gentle temperament, he is easy to handle and a pleasure to take on any shoot. Top Notch is one of the most relied upon dogs in the picking up team. He is a proven stud. He carries 2 copies of the Tan Point gene and also carries solid colours, parti-colour and roan. He has a very gentle temperament. 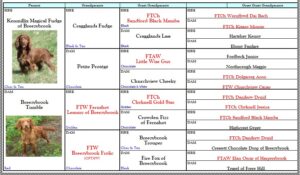 Breezybrook Wonky is a chocolate dog sired by OFTW Fenlord Tonto and out of FTW Breezybrook Frolic.

He is grandson to Breezybrook Trouper and has Troupers drive! He also carries the Tan gene so can produce chocolate & tan or black & tan puppies. A proven stud dog.

He is a small flashy mover, who is really quick over the ground and he also relishes heavy cover.

Wonky (so named as he only has one ear flap, after Frolic accidently bit it when he was born) has proved to be a popular sire to agility bitches because of his small size & great speed.

Wonky competed in one working test in which he was placed 1st. He has also passed his KC Gundog Working Certificate.

Wonky has been health tested as follows: 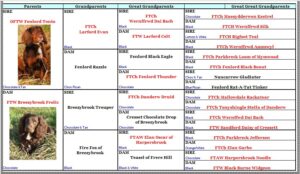